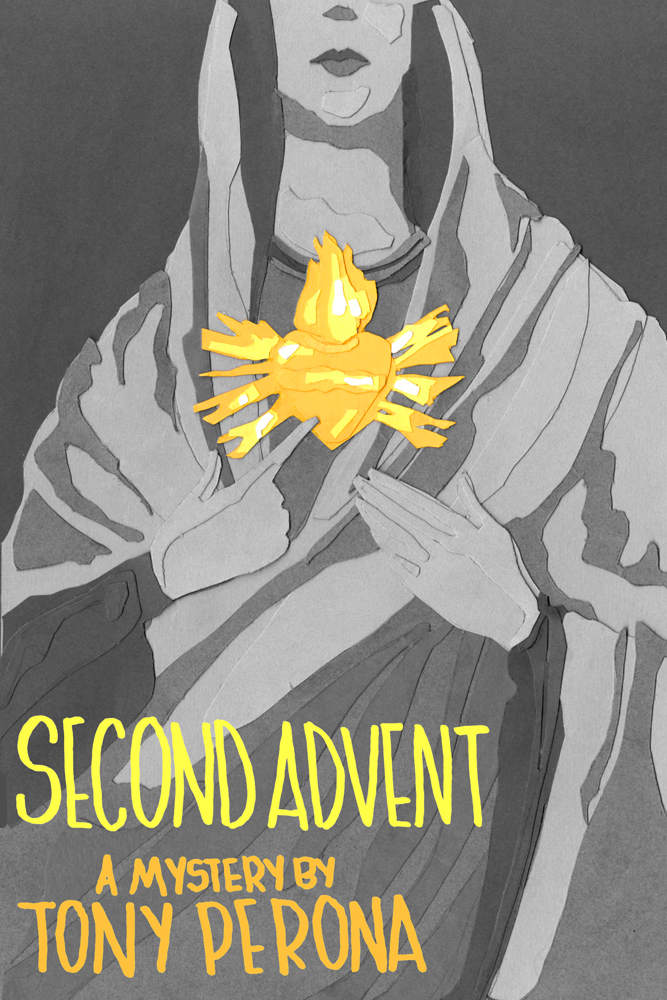 When Nick Bertetto, a stay-at-home dad and former investigative reporter, is asked to return to his hometown of Clinton, Indiana, to investigate the death of the town patriarch, he views it as a chance to spend time with his dad and pal around his old Italian-American stomping grounds. It isn’t long before his attitude changes. The alleged suicide is quite probably murder, and member of the patriarch’s family are drawing battle lines over the will. But Nick is most disturbed that the old family priest who summoned him and the patriarch’s granddaughter who wants him to prove it was murder, had the most to gain from the death.

The two run an organization called “Children of the Second Advent” to which half the estate was left. ‘Second Advent’ promotes the messages of the Virgin Mary to a local visionary who claims Mary appears to her pregnant, signaling the second coming of Christ. Nick’s own romantic past with the visionary complicates his investigation. And as it turns out, there are lots of townsfolk who wanted the patriarch dead.

Soon, there are several lives in jeopardy, and all Nick wants to do stop sorting suspects and go back to sorting laundry. Out of leads and nearly out of time, he must find a way to join the suspects as they converge on the one place where all pretenses will be dropped, all secrets revealed, and a miracle is promised — the birthplace of Second Advent.

When Nick Beretto, stay-at-home dad and former investigative reporter, almost hits a homeless man wandering down ao highway in his hometown of Franklin, Indiana, he stops to help. While unconscious, the man mumbles, “Cahill wore red.” It seems nearly impossible to Nick that the man could know anything about the recent disappearance of State Representative Calvin Cahill, but with Cahill’s name prominently in the news, Nick takes a special interest in the homeless man, Elijah Smith. He begins to investigate what Smith says ‘angels’ whisper to him about Cahill.

Soon Nick has an assignment from his former employers at the Indianapolis Standard to work with longtime friend, reporter Ryan Lockridge, on the Cahill story. But someone clearly doesn’t like the progress Nick and Ryan make, as Nick is beaten up and threatened.

By the time they figure out the disappearance is related to lobbying tied to proposed gambling legislation, dead bodies are turning up. Nick and Ryan must get to the bottom of the mystery before Smith’s angels prove to be correct when they whisper, “Someone you know will die.”

When a Columbine-style massacre occurs at West Jasper High School, the police are unable to decipher a cryptic verse left on the library wall implying the assault had a satanic cult connection. Freelance investigative reporter Nick Beretta begins to search out possible cult influences with the help of Kevin Mueller, a 16-year-old would-be reporter inside the high school.

In short order, the body of a young victim from the massacre is stolen out of the cemetery, and the attempted robbery of saintly relics from a nearby cathedral is tied to it. But when Nick is able to connect all the events in a way no one expects, it leaves Kevin in danger and Nick only one night to confront an ancient evil whose ambition is far deadlier than anyone imagines.

“Tony Perona has stirred together faith and mystery and cooked up a tantalizing story.”

Sign up to receive news about book signings, new releases, and other fun stuff!